(Note: This is a work in progress, but we wanted to provide people with some historical context. More details will be added later)

The roots of this go back to the early 2000s when Black teachers would meet at Panera Bread or at a staff member’s home to fellowship in a safe space to share and discuss creating a more equitable and tolerant environment in District 214 for teachers and students of color. Originally, these meetings were attended by District PR director Venetia Miles and Associate Principal from Wheeling High School, Dr. Kelvin Lane.

Black teachers continued to meet even after Venetia Miles and Dr. Lane left the district.

The African American Leadership Team (AALT) was created by these teachers in 2014, and have met annually with Superintendent Dr. Schuler since.

In 2015, AALT created the African American Teen Summit with the following Mission Statement:

To examine critical issues that impact Black students academically and socially. These are issues that can shape their perception and knowledge of themselves, as well as educate them on how society may perceive them in a global context. Thus, empowering them to make positive and informed choices for their academic futures and long-term success.

The purpose of the African American Teen Summit was to not only give Black students a safe space to discuss their experiences, but also to educate students on cultural topics, such as stereotypes and activism. The summits were sponsored by District 214 and it was hoped that through the Summits, the district would take action on the items discussed. 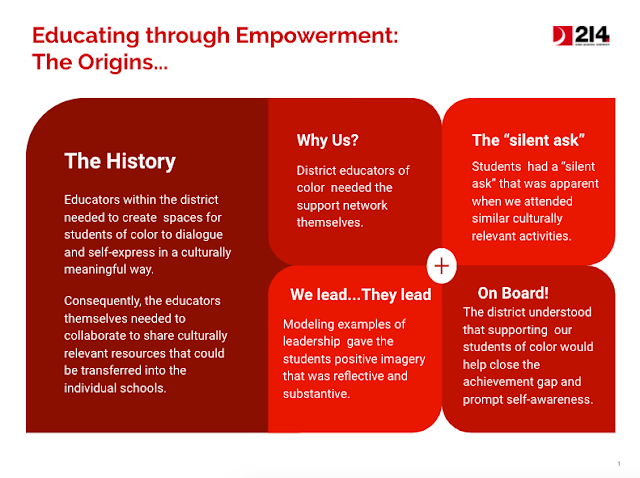 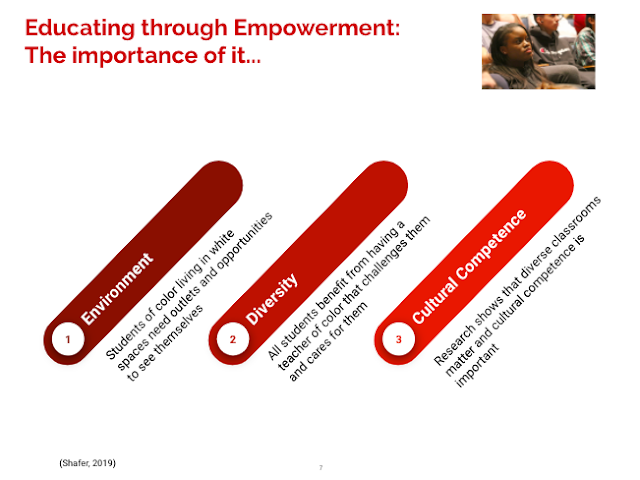 The teen summits were successful and helped define the changes that needed to happen to provide for students and staff of color in District 214. Further meetings with Administration and Board members occurred. These meetings were often conducted under the title of “Cultural Inclusiveness.” Teachers worked tirelessly, presenting data and resources supporting the need for a top-down approach to creating a fair and equitable system in District 214. They have advocated for the following things to be implemented on a district level:


More recently, the district created the Race and Equity in Education Committee (REECom). This committee featured teachers from all over the district and they were encouraged to share their experiences as well. Much of what had already been spoken about in earlier meetings a decade ago was reinforced by teachers in this group. And at a more recent REECom meeting, participants who were discussing specific changes to policy were told by an administrator to "stay in your own lane."

The frustration for many people involved in this issue is that there has been much talk over the last two decades of making substantial changes in District 214, but far less action. Teachers have taken it upon themselves to try and bring some of these changes to their individual schools. However, attempts at creating student groups, new courses and affinity spaces have been impeded by administrators and red tape. Requests to bring in anti-racism speakers for institute days have not been consistent throughout the district. Replacing outdated and culturally insensitive curriculum has been met with resistance.

Early on in this process, it was agreed that the burden of bringing changes to District 214 should not be on the shoulders of teachers and staff of color. These changes need to come from the top.

And, in spite of two decades of work, that has not happened in a substantial or systemic way.

This is the official website for the District 214 Justice Group. Our goal is for District 214 to make substantial changes to promote justice and equity for students and staff in District 214. This group is made up of staff from all over Township High School District 214.